What is the best scheme for similarity search based on binary codes with Elasticsearch ? (Context is image search with deep nets)

We're using deep convolutional neural networks to fast process images and make the building of image similarity search engines a commodity for everyone. Our pipeline uses the neural nets to turn images into actionable binary (or float) hash codes that are then used for image similarity retrieval.

Performances and accuracy are well above those of existing techniques such as the LIRE plugin (https://www.elastic.co/blog/found-getting-started-with-lire-and-elasticsearch). An easy to reproduce example lies here: https://github.com/beniz/deepdetect/tree/imgsearch/demo/imgsearch
Not that it does not use Elasticsearch.

However, the solution above does not scale well above a million images, and we have studied how to complement our existing work (https://www.elastic.co/blog/categorizing-images-with-deep-learning-into-elasticsearch) and use Elasticsearch in a seamless manner for image similarity search as well.

We've studied and tried the methods described in http://stackoverflow.com/questions/32785803/similar-image-search-by-phash-distance-in-elasticsearch and that involve no additional code (or plugin to ES). This is because we favor 'out-of-the-box' and seamless pipelines that do not require fiddling with the inner guts of ES (or any other piece of software for what matters!).

I is noteworthy that using the fuzziness capability on strings of 1s and 0s almost got us where we wanted, but Levenshtein distance appears to not go above two edits, which is too low for our strings which are commonly a 1000 characters long. On the sidenote, I am interested in understanding why the cap on the Levenshtein distance ?

Any ES expert out there who could confirm our findings above, and possibly give us leads to where to look and what best options for scalable similarity search based on binary hashes or arrays of floats ?

Hi @beniz, my colleague pointed me towards this thread. Very interesting stuff!

Correct, Elasticsearch doesn't currently offer either of these as direct similarity metrics over a binary field. When the murmur3 analyzer was added, I remember us talking about adding hamming / minhash style capabilities, but it never materialized.

On the sidenote, I am interested in understanding why the cap on the Levenshtein distance ?

It's a good question, and not entirely intuitive if you don't know the backstory. The simple explanation is "for technical reasons".

The fuzzy query (and variants, like wildcard, prefix, etc) work by generating a Finite State Automata that represents every variation of your input text within n edits. This is then intersected with the term dictionary (which is stored in a FST), and the resulting matches can be enumerated much quicker than trying the brute-force method of fuzzy evaluation.

The trick is that generating a "fuzzy" FSA that accepts the appropriate edits is very challenging technically. Mike McCandless wrote up the story of how it was implemented in Lucene, it's a fun read: http://blog.mikemccandless.com/2011/03/lucenes-fuzzyquery-is-100-times-faster.html

Ultimately, the reason the edit distance is limited to 2 is because the generated FSA is already quite huge. Edits higher than 2 would start generating truly enormous FSAs, and the number of matching terms would greatly slow down the evaluation. So Lucene made the decision to just cap the limit at 2 edits.

If you're curious, Mike has written some more about how FSTs are used in Lucene in other places: http://blog.mikemccandless.com/2010/12/using-finite-state-transducers-in.html

Part 2, since the forums said I wrote too much for one post

possibly give us leads to where to look and what best options for scalable similarity search based on binary hashes or arrays of floats ?

So, I encountered this exact problem a few years ago when working on a biology demo. I wanted to do genomic sequence alignment, which is a very similar problem: given two strings of characters (constrained to 20 unique characters, one per amino acid), how similar are they?

As you discovered, hamming distances are difficult in ES. There are a few options

Ultimately, I realized that since ES lacks the appropriate similarity metrics to do binary hamming-distance-style evaluation, I had to bake some of that logic into the tokens themselves. I used a custom genomic Locality Sensitive Hash (similar to a pHash for images). Then the procedure was:

It obviously has some issues. You need "enough" random projections to cover the search space, and you can never guarantee that every candidate is fully covered. It may return spurious results which happen to hash to similar regions but are in fact very different. And the method of hashing affects how results are grouped. But it's a decent approximation, and most importantly, is very fast (since at the ES layer it's just simple token matching).

I'm unsure how your image hashing works, but if it can emit actual features instead of collapsing them to a binary hash, you could side-step the entire random-projection issue and just index those features directly.

E.g. perhaps you can grab the weights of the final output layer, discretize them into buckets (to make tokens easier to search, as opposed to floats) and index those weights directly. That only works if outputs share semantic overlap between similar inputs, I don't know enough about deep convolutional networks to say.

Hope that helps! Would be happy to talk out any potential ideas you have, even if they are entirely unrelated to this novel that I just wrote. I really love thinking about these kinds of use-cases in ES. Goodluck!

If you're curious, this is a slide-deck from a meetup about the above system. It's a little hard to grok since the slides are more speaking aids than self-descriptive, but hopefully it helps a bit: 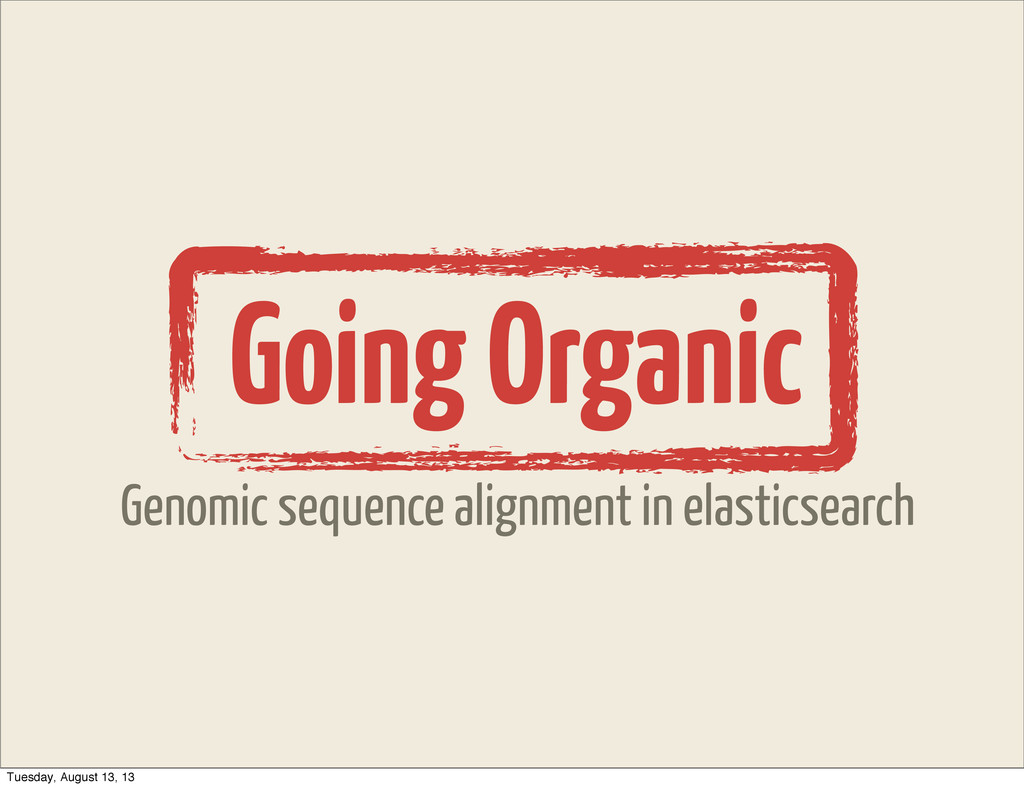 My presentation from Elasticsearch Boston, given at @hackreduce. It details my journey through a side project - the problems, the pitfalls and finally a locality sensitive hashing algorithm that saved the day.

even if they are entirely unrelated to this novel that I just wrote.

Hi @polyfractal, many thanks for having taken the time for the detailed answers. I got a good laugh from the one quote above, thanks for this as well

It will take a bit of time to re-read this in detail, do some tests and share thoughts.