256GB worth of logs accumulate over 24 hs

I'm running a honeypot in a sandbox environment for testing purposes before I expose it to the Internet. Both the honeypot and Elastic seem to run fine on all fronts. The main issue I'm having is that despite the fair amount of storage space (256GB), the logs fill up very quickly (2 days!), and then the honeypot crashes (obviously).

The main culprit is suricata, so I deleted the eve.json file, which was clogging up the system. Now other eve.json files are filling up quickly as well. I turned off suricata as a palliative measure, but it turns back on by itself unless I completely disable, which then renders the honeypot unusable, as it won't work. Similarly, changing logrotate settings to dump files after a few hours is not a solution since I need to have time to analyze the findings.

So, my question is how I can minimize the amount of logs being produced so that I can run t-pot normally without having to dump files so often. Thank you in advance for your help. 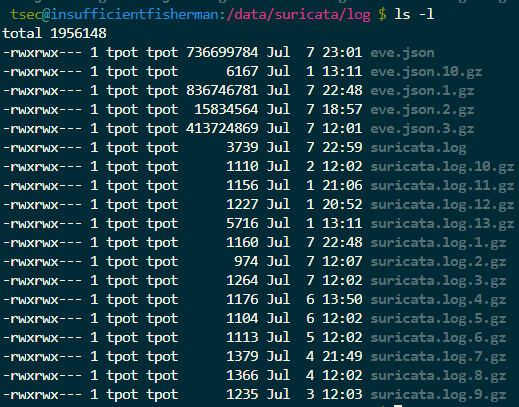 I'm not sure how this is related to elasticsearch since the tool that is creating your logs is not a part of the stack.

You need to check the documentation/forum for Suricata to see how you can deal with that.

If the issue is the size of your indices, then you would need to create a lifecycle policy to remove them after some time.

Can you provide more context about your elasticsearch use in this case?

this seems creating lot of logs and rotating it. check logrotate part of OS. and you can rotate log faster and can keep only one or two older log

To answer your question, the honeypot captures attacks that I'm performing and then displays it on Elastic. I noticed that there are alleged attacks even on a fresh install of the honeypot, even without my attacking it.

I've tried doing that, but it's not feasible for me to have to delete logs too often, just so that I can free up space. In my answer to Leandro, I said that the problem may be because the honeypot is capturing all traffic in the network, not what simply what is intended.