"No logs for this cluster"

I've been trying to set up logging for the Stack Monitoring page, but it just won't seem to work:

I enabled the elasticsearch module in filebeat with this config:

I created an indice called "filebeat-000001" (with a ILM police and rollover alias), and I can see that it sends the log files present in the /var/log/elasticsearch/ folder with:

I wasn't sure if needed a index template, but I created an empty template that matches filebeat-0* with everything else left to blank/default with dynamic mapping on.

What could be wrong? The linked document doesn't really give me any more clues.

did you run the filebeat setup step, which is responsible for creating the index templates and ingest pipelines for all enabled modules?

Hi,
I just tried running the command, and I get this:

Exiting: couldn't connect to any of the configured Elasticsearch hosts. Errors: [error connecting to Elasticsearch at http://REDACTED:9200: 504 Gateway Timeout

This is not the machine with Kibana on it, is that the issue? That one doesn't have Filebeat though.

The setup command should be run from the same host with the same module config that filebeat is supposed to run on from then on. That error message sounds like it's unable to reach Elasticsearch through a reverse proxy.

If you configured the setup.kibana.host setting as well, then it'll also try to reach the Kibana host to install dashboards, but thats optional (see step 5 and 6 in the docs).

Is it trying to connect to the HTTP port?

Yes, both Elasticsearch and Kibana are accessed via their HTTP API.

Hm, but if it can send data through the ES module in Metricbeat to itself and to Kibana, how come this doesn't work?

That is surprising indeed. Are you able to share your main filebeat config file?

Inlcuding only the things that aren't commented out from /etc/filebeat/filebeat.yml:

Small update, turns out "REDACTED-HOST-1:5601" was decommissioned and not up anymore. After changing that to the current Kibana host I now see this error:

I still get the other error running filebeat setup -e

Thanks for providing the config file, it looks fine so far.

The http response code 504 suggests that you're connecting to Elasticsearch via a proxy. Can you verify that there's no unexpected filtering or routing happening on that level? If not then the requests sent by setup should leave traces in the Elasticsearch log (e.g. that it's creating index templates and pipelines). Is that the case?

I think I at least managed to get it to detect that filebeat is sending logs to Kibana after that change earlier since I now have a new error, but how should I go about troubleshooting the missing JSON logs? I don't see any in the default folder.

EDIT: I found these JSON-files:

Is this default behaviour or is this modified so I have to add these paths the module as well?

@fus80677 ES will store all its logs to the location specified for path.logs property in your configuration (elasticsearch.yml). You should mount this volume to your filebeat in order for filebeat to read those logs.

Since you are using elasticsearch module in filebeat, I'm assuming elasticsearch.yml (filebeat module configuration file) will be stored in ${filebeat_home}/config/modules.d directory.

From your last post, it seems ES logs are being stored at different locations, you need to specify the correct paths for each type to ensure the logs are being parsed correctly.

PS: Filebeat doesn't connect to Kibana to send logs, logs are always ingested in Elasticsearch and Kibana loads the logs from Elasticsearch. The only point when beats interact with Kibana is to setup dashboards and stuff.

Ah, now I see that it has a custom log path in elasticsearch.yml!

But when I correct these paths, I'm back at the first error until I change it back to the default paths? I can see log files in these folders that it should find.

Perhaps the issue is the template/pipeline then? I have these pipelines at least: 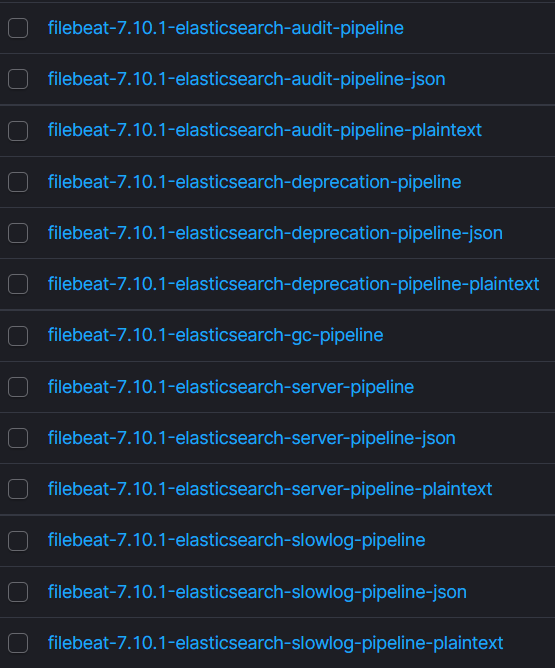 I let it sit for a few days to see if a new index would help, but nope...

Are there logs for this specific component somewhere?

I also noticed that the documentation page links to this. I don't have any of these fields in the indexes or template, could that be the issue?

EDIT: I ran filebeat export template > filebeat.template.json and then copied the contents of it to the JSON-field in the template editor in Kibana, I'll check what happens when it rolls over next time and (hopefully) applies it.

And that was it! After applying the (default?) settings and mappings I got from that file to the new template, the logging feature finally started working after it rolled over to a new index with them!