I had a 5 node cluster that went TU over the weekend (Tits Up).

vm.swappiness is set correctly (according to advice given here: https://www.elastic.co/guide/en/elasticsearch/guide/current/heap-sizing.html)

ES_MAX_HEAP is set to 50% the available RAM (so around 16GB on this instance type). 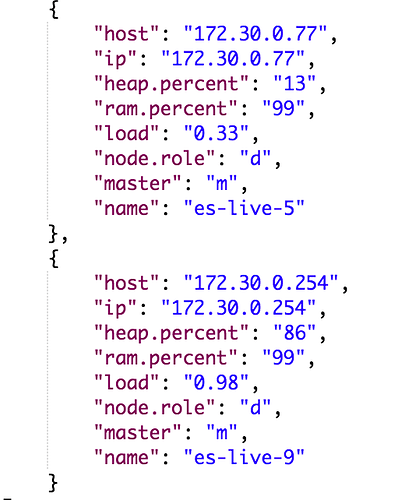 The compare with the Used RAM gauge on my netdata dash taken at the same time:

Thanks for any help offered!

What exactly happened? What is in the logs?

From what I can see a similar thing happened across all nodes:

All of this happened before the above scenarios. When I finally got the cluster back together, this is what it looked like.
I started up a failover cluster, because the live cluster remains in a hobbled state (it won't assign shards from a snapshot restore to any node despite the fact that they all have capacity).
When restoring a snapshot to the failover cluster I got the same sort of stats as above:

So my question remains: What is ram.percent? It's not an indication of system ram. It's not JVM heap usage. So what resource is it? And how can I increase it if I need to?