How to connect Maps to a WMS server

I was wondering if anyone had any success in getting the Maps app to show data from a WMS server. I looked at the Docs but the WMS part is empty.

I did follow this guide and managed to get the NWS data to show up (cool!) 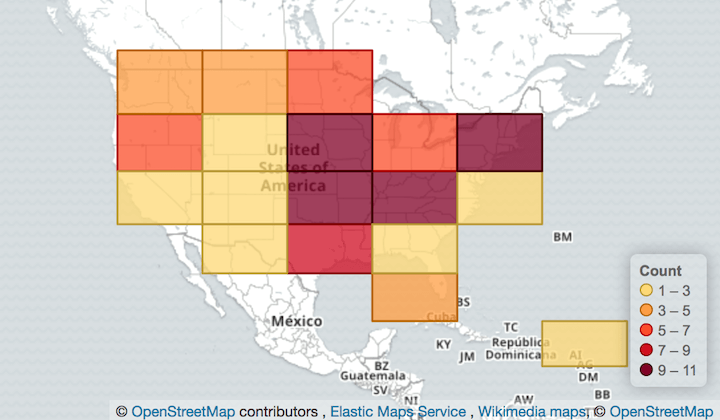 Custom basemaps for region and coordinate maps in Kibana

Did you know you can configure Kibana to use a custom basemap for all your region maps and coordinate maps? Let's talk about a few options for doing so.

However when I set up a basic Geoserver with a shapefile as the base for my layer it doesn't show up. No doubt I'm doing something wrong, haven't used Geoserver much before. I couldn't really find any resources online so I'm hoping somebody did this before and maybe can share a bit more about how to get this done.

Alternatively I tried using geo_shapes which are great, easy to use and do exactly what I need but the downside is those geo_shape layers are affected by filters.

Thanks for your interest in the Maps app! Configuring WMS to work with the Maps app can be a little tricky. We are working on making WMS easier to use in a future release.

For example, let's take a look at the GetCapabilities from the NOAA Weather Radar.

Hope that helps. Feel free to reply if you need more assistance.

Thanks for the reply.

I know in the URL it doesn't show EPSG:3857 but under Edit layer => Tile caching it shows

I also got my custom layer to show in the coordinate map but again it does not show in Maps. The NOAA link shows in both.

Since you've opened an issue in the Kibana repository I assume you believe this is a bug so we should continue the conversation there instead. https://github.com/elastic/kibana/issues/38362