No data on graphs

My marvel plugin was working fine until the license was 2 days from expiring. I installed the trial license from the web page and everything was great. Then I noticed the graphs were no longer generating and I was not getting any data on index rate. I sent a request for a new basic license and uploaded the downloaded json file as per the instructions and still no info on the displays. See below:

Does the trial version not generate graph info or index rate information?

The trial version has extra features that do not exist with the basic version. However, it should still collect and draw data.

Because the trial license actually allows more functionality than the basic license, it is necessary to acknowledge the license change when you submit the license update.

It's the difference between:

Can you verify that you have installed the basic license by fetching your license and checking its "type":

My assumption is that the trial license is still installed, but it has expired.

No. Logstash shouldn't be involved with or impacting Marvel.

You don't actually need to restart your cluster after updating your license for Marvel. Downgrading the license does impact other plugins, like Watcher, Shield, and Graph, but not Marvel.

What's the output of this command against your host?

Feel free to exclude the uid field, but it should look something like this:

Sorry i know it has nothing to do with logstash I've been doing updates all day and logstash was on the brain.

Interesting. You definitely have a Basic license installed. I wonder, which version of Kibana are you running? Kibana 4.2 - 4.4 by chance?

No, the license plugin is what enables licensing -- regardless of the license. 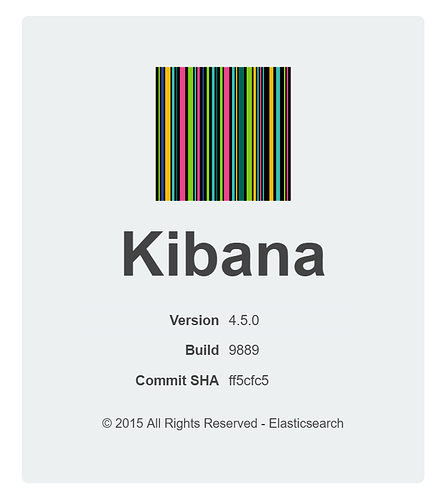 Anything further to check. I know data is going into the cluster but I don't get any details on the graphs. Is there any other way to see indexing speed?

Sorry, yes. Let's check the version of the Marvel plugin within Kibana itself. Unfortunately until the next release it won't actually report it anywhere, so you have to check a file manually.

Check the file at

The version field should be the same as your ES cluster ("2.3.3"). Let me know what you find here.

sorry for the delay:

here is the verion block from the file you asked for:

And this mornig I just received this error:

No worries. This is definitely unusual. I have never seen issues with this part of Marvel. I wonder if somehow its installation got corrupted?

From Kibana, can you remove it / reinstall it?

If that doesn't fix it, then I have a more complicated idea of what might be happening, but I'm hopeful that it was just a simple corrupted download.

I have to do offline installs because the network has no internet connections. I will download a fresh copy and give it a shot

I think you must have been right with the corrupted download. I deleted the plugin, downloaded and installed a new one, and now all graphs are working again.

Thank you for your time. I really appreciate the assistance.